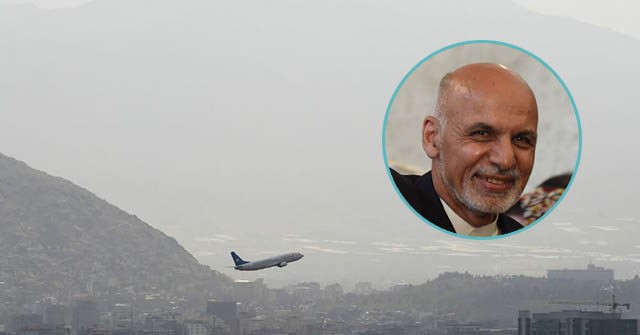 The Afghan ambassador to Tajikistan for the former government of President Ashraf Ghani said Wednesday that he is seeking help from Interpol to arrest the ex-head of state over the embezzlement of tens of millions of dollars.

Ghani abruptly fled the country on Sunday following the arrival of Taliban soldiers to the city limits of Kabul, the capital of Afghanistan. Less than 24 hours before his departure, Ghani appeared on national television in a pre-recorded speech claiming he was working to reconstruct the Afghan military to reverse the Taliban’s nationwide territorial gains throughout the Summer.

A BBC reporter, citing Ambassador to Tajikistan Mohammad Zahir Aghbar, said Ghani reportedly left the country with $169 million of unclear origin. The report supports allegations from Russian officials this week that Ghani rapidly stuffed suitcases with cash upon hearing the news of the Taliban’s arrival and attempted to take so much of it that it did not all fit in the four cars and helicopter that he took with him.

The United Arab Emirates (UAE) confirmed Wednesday it had allowed Ghani entry into the country on “humanitarian” grounds.

The Afghan news agency Tolo News reported Wednesday that Aghbar had formally requested Interpol “detain Ashraf Ghani” and two other senior officials who fled with him on “charges of stealing public wealth, so that funds could be returned to Afghanistan.” Aghbar also dubiously declared himself the first vice president of the country.

Mohammad Zahir Aghbar, ambassador to Tajikistan, has said today that according to the Constitution, in the absence, escape or death of the president, the first vice president becomes the caretaker and Amrullah Saleh is currently the official acting president, sources said. pic.twitter.com/F3XEngNMj3

Ghani’s First Vice President Amrullah Saleh posted on Twitter on Tuesday that he was the legitimate “caretaker” president of Afghanistan now that Ghani had fled. Saleh appears to have no tangible political power and no public support; he made his claim during the Taliban’s first press conference since it formally declared itself the government of Afghanistan on Sunday.

No evidence suggests that Aghbar or Saleh are in contact with the Taliban.

Interpol is an international agency that helps national and regional law enforcement entities communicate to better capture fugitives. It does not have arrest powers. Interpol can issue various types of “notices” that alert entities that do have arrest powers to detain the people in question. The most powerful type of notice is a “red notice,” which the agency defines as “a request to law enforcement worldwide to locate and provisionally arrest a person pending extradition, surrender, or similar legal action.”

Highlighting Interpol’s impotence in the face of international criminals, the Chinese Communist Party abducted the president of Interpol, Meng Hongwei, in 2018. Interpol accepted a “resignation” allegedly written by Meng and stated it did not have the power to question the law enforcement activities of the Chinese government. Meng remains in prison in China on unspecified claims of accepting bribes.

Tolo News did not clarify what Aghbar asked Interpol to do, given that it does not have the power to arrest Ghani. As Ghani stands accused of criminal behavior, Aghbar could have asked the agency to issue a “red notice.”

Ghani served as president of Afghanistan from 2014 through last Sunday with the support of the United States government. He regularly claimed that Afghanistan’s official military forces were capable, with U.S. assistance, of fighting against Taliban jihadists attacks and blamed the U.S. government for any losses the Afghan military incurred. Both Ghani and his senior advisers were extremely critical of President Donald Trump for negotiating a deal with the Taliban last year that would have had all American soldiers out of the country by May 1.

President Joe Biden announced in April that he would break the agreement with the Taliban, keeping U.S. troops in the country through September. In response, Taliban leaders stated they were no longer bound by the agreement – which required them to cut ties to international jihadist groups like al-Qaeda and cease attacks on U.S. forces – and launched 22,000 attacks between April and July, according to Ghani’s government. After a rapid series of nearly bloodless conquests throughout July, possible due to thousands of Afghan troops simply leaving the battlefield, the Taliban arrived in Kabul on Sunday.

Ghani claimed to be rebuilding the Afghan military in remarks broadcast to the country on Saturday night.

“Under the current situation, remobilizing of the security and defense forces is our top priority and required measures are underway for this purpose,” Ghani said, vowing to work to prevent “further killings, loss of the gains of the last 20 years, destruction of public property and continued instability.”

Ghani was out of the country hours after that broadcast. His whereabouts were unknown between Sunday and Wednesday.

The Russian embassy in Kabul claimed on Monday that he had left with bags full of cash.

“As for the reasons of the collapse of the regime, they are characterized by how Ghani fled the country,” an unnamed Russian embassy employee told the Russian news agency Tass. “Four cars were packed with money, and they tried to cram another bag of cash into the helicopter. Not all the cash managed to squeeze in, and some of the money was left lying on the airfield.”

A mysterious post on Ghani’s official Facebook page – which no longer appears to exist as of Wednesday morning – posted an explanation for his departure on Monday.

“Today, I faced a hard choice: either stand and face the armed Taliban, who wished to enter the palace, or leave my dear country that I dedicated my life to protecting,” the message read in part. “In order to avoid a flood of bloodshed, I thought it was best to get out.”

On Wednesday, BBC reporter Kawoon Khamoosh said that Aghbar had accused Ghani of fleeing the country with $169 million.

Afghan ambassador in Tajikistan says Ashraf Ghani escaped with bags full of 169 million US dollars when Kabul was falling.

The UAE state news agency WAM posted a one-sentence confirmation from the nation’s foreign ministry on Wednesday stating that Ghani had arrived in that country and that, due to “humanitarian considerations,” Abu Dhabi had chosen to allow him to legally remain there.