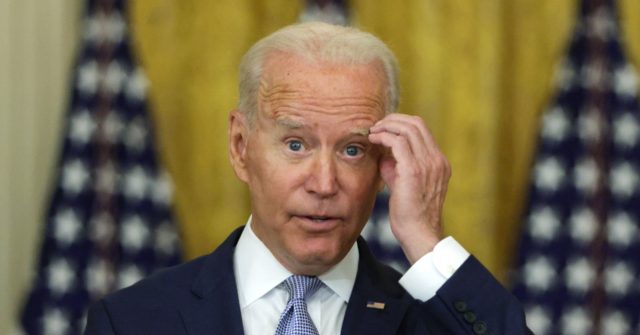 Congressional Democrats are blaming President Joe Biden for failing to secure a safe and orderly departure from Afghanistan.

“I am disappointed that the Biden administration clearly did not accurately assess the implications of a rapid U.S. withdrawal,” Chairman of the Foreign Relations Committee Sen. Bob Menendez (D-NJ) told the Hill.

Sen. Tom Carper (D-DE) explained the drawdown “should have been carefully planned to prevent violence and instability, and to ensure that the hard-fought progress gained over the past two decades—particularly when it comes to Afghan women and girls—would not be lost.”

Kelly called the evacuation “a failure to prepare,” while Hassan suggested the White House oversaw “a precipitous withdrawal with no real plan in place to ensure the peace and stability of Afghanistan and its people.”

A host of other endangered House Democrats have also been quick to distance themselves from the flailing administration. Rep. Stephanie Murphy (D-FL), who is facing a tough fight from Florida State Rep. Anthony Sabatini (R), called the “situation” “heartbreaking,” and that she believes the United States does not have an “easy choices here.”

“The U.S. should have done more to prevent this worst-case scenario. Now we must do whatever we can to support our Afghan allies and protect our national security interests,” Murphy stated.

Rep. Chris Pappas (R-NH), a vulnerable Democrat who may be challenged by Matt Mowers, issued a statement calling the Afghan situation “devastating and deeply concerning”:

Our first priority must be the immediate evacuation of U.S. citizens, SIV applicants, and our allies who stood beside us and whose lives are now in danger. There will be time to re-examine foreign policy failures over two decades that shaped today’s events. But now we must do all we can to ensure the safe return of Americans and our partners and honor the service of all those who deployed to Afghanistan and their families.

“We must ultimately grapple with the failures that led to the fall of Afghanistan to the Taliban, but today, in this moment,” Rep. Elaine Luria (D-VA) explained, “we must keep our focus on taking every possible measure to evacuate American citizens and our Afghan partners who fought bravely beside us for two decades.”