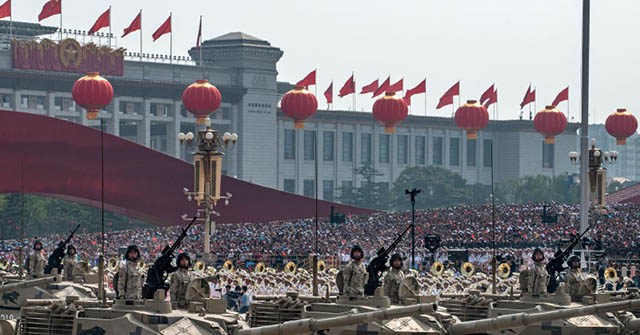 “The Taiwanese must be very concerned about how much they can rely on the U.S.,” Prince said Monday’s edition of SiriusXM’s Breitbart News Daily with host Alex Marlow. “If I were the Taiwanese leadership, I would load up an airplane full of cash and fly to either India or Pakistan and go buy a few nuclear weapons, because it’s really ultimately up to them to determine their own defense [and] their own deterrence, because I don’t think they can depend on the United States showing up for that.”

He remarked, “Ultimately, Taiwan needs to defend itself. They need to prove that with their willingness to defend themselves and certainly a nuclear deterrence is the best way from to do that.”

Prince said weapons and military vehicles the Pentagon abandoned in Afghanistan have been acquired by the Taliban, Iran, and others. Breitbart News could not independently verify this claim.

He stated, “Hundreds of thousands of small arms, artillery machine guns, high-precision brand new drones still in the package — these are eight- and twelve-hour surveillance drones that go for $3 million a piece — hundreds of aircraft — fixed-wing and helicopters — including laser-guided bombs laser-guided rockets, some pretty capable stuff, much of which has already shipped on to Iran or sold off.”

Afghanistan could have been “pacified” for five percent of the cost spent by the Pentagon with a “practical,” “cheap,” and “effective” strategy built upon special operations forces coordinating with local tribes, Prince argued.

“[The Taliban] say, ‘You have the watches but [we] has the time,” he remarked. “If you focus on being practical and cheap and effective, you can certainly out wait and outlast them. If we had just focused on what worked in the first place — the first six months — you had special operations backed by a little air power and they smashed the Taliban from October of 2001 and until the summer of 2002.”

He continued, “And then when the conventional military rolled in, we replicated the Soviet battle plan with all of its costs, and the U.S. military replicated its high-cost self in Afghanistan in a country that was never really a country before. It was largely just a group of tribes. So the SOF model worked with those local tribes, and it worked with the ones that were friendly and good to smash the Taliban.”

“If we kept the effort at that level, it would have worked,” he added. “What I recommended to President Trump was a model just like the special operations units use for the first six months, so all the high cost conventional military could have gone home. It would have cost less than five percent of what the Pentagon was spending on full effort, and it would have kept a lid on the whole country for decades to come.”

“It’s funny seeing McMaster being all negative on the Afghan policy now,” Prince assessed. “He and Mattis were largely responsible for shooting down that approach. McMaster was a three-star armor officer who wanted a fourth star and he wanted to do exactly what the Pentagon wanted. Mattis was effectively a five-star marine general who couldn’t think unconventionally, at all. … He just could not embrace that kind of solution.”

He recalled, “The one time I saw Trump when he was president was at a Veterans Day event in 2019. He said, ‘Eric, you’re right. I should have listened to you on Afghanistan.’ I said, ‘There’s still time, Mr. President.’ But he didn’t.”