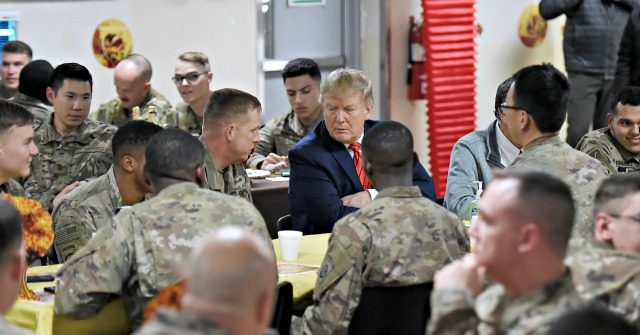 Former senior Trump administration defense and intelligence officials watching the disaster unfolding this week in Afghanistan say that the incoming Biden administration rejected their plans for a stable withdrawal, which included keeping a small unit to conduct counterterrorism operations against al-Qaeda, the Islamic State, and the Taliban if necessary.

Three former senior officials told Breitbart News that the small force of about 800 U.S. troops would have been left in place to continue the counterterrorism mission, but to also provide intelligence and logistical support to the Afghan military and prevent the kind of collapse the world is witnessing now in Afghanistan.

“That was the hope…to be able to do the drone mission and the counterterrorism support, and also advising specifically the Afghan Special Forces who were doing a lot of the [counterterrorism] efforts…And Biden just pulled them out as well,” one former senior defense official said.

“We were going to be leaving a small force behind regardless,” a second former senior defense official said, adding about former President Donald Trump, “When things started to go bad, he’s changed. I mean, he had a history of changing his mind when it, when he realized it was going to go badly.”

“He didn’t want to continue a forever war of nation building in Afghanistan, but did he literally say, you know, have no one on the ground? No,” said a third former senior administration official, who pointed to Trump leaving 900 U.S. troops in Syria. “I can’t get into like specific details, but I think that is broadly consistent with what I was saying about his approach to issues.”

Separately, Kash Patel, who served as the Pentagon chief of staff until this January under the Trump administration, did not confirm where the troops would have been staged, but said leaving some in the region was part of the pre-conditions the Trump administration was negotiating with the Taliban and the Afghan government as part of their conditions-based military withdrawal.

“Those conditions, specifically, were: A direct repudiation and rejection of Al-Qaeda by the Taliban; an agreement between the Taliban and the Afghan government to negotiate an interim government that the U.S. would assist with; and a technical detail was we would leave a Special Forces unit in the region to combat any terrorist threats that came up during the process,” he told Breitbart News in an interview on Wednesday.

He said leaving that force there would have allowed the Afghan military “to feel secure enough.”

Patel said that blueprint — as well as plans for removing Americans, equipment, and machinery, as well as for contingencies — was handed to the Biden administration, but “they just basically threw it out the window and fast forward six, seven, eight months.”

“Austin refused to meet with Miller or even have a discussion with him regarding the transition or anything else. Hard to say we didn’t leave them a plan when they refused to even meet or discuss it,” the former official said.

The former official added that neither then-top Biden transition team members Kathleen Hicks or Christine Wormuth bothered to meet with Miller either. According to a Bloomberg report in January, the Biden team even denied Miller an office at the Pentagon as he wrapped up his work, as is customary for outgoing administrations.

“[They] said we were the JV team and they didn’t need us,” the former official said.

Since the stunning collapse of Afghanistan, the Biden administration has blamed it on the lack of intelligence, saying that no one predicted that it would fall this quickly. However, the former senior officials — all of whom were either privy to intelligence up through January or held intelligence roles — said that is not true.

“Intel was saying that this was an issue. I think the biggest thing was how they did the withdrawal. They pulled out 16,000 contractors and all of our troops overnight,” the first former official said.

The third former official concurred, saying that while intelligence reports are often written in an imprecise way to avoid being wrong, it appeared that the U.S. military “pulled the rug out a lot faster than anyone was anticipating over the last two months.”

But the third former official said the military did so because of direction from the White House and Biden’s order in April to withdraw all troops by September — “an arbitrary date” with “bizarre symbolism.”

That forced the military to choose between keeping the Kabul airport open or the Bagram air base, the former official added. “So they had to make, make choices because they were limited. And you know, where those, where do those limits come from? Those come from political folks at the White House.”

The Biden administration has come under heavy criticism for departing Bagram, a massive air base 20 miles north of Kabul which may have been easier to defend and evacuate American citizens from.

Pentagon Press Secretary John Kirby said Wednesday that the handover of Bagram was part of the Trump administration’s plans, but the former officials say they would have kept Bagram air base under U.S. military control until all Americans were out.

“They gave that up before doing anything. And now they’re wondering why Kabul international airport is basically a war zone, with people falling out of airplane and how come we can’t get our citizens to Kabul. Because we gave up our central security node. Biden did and that’s not a plan, that’s just ridiculous,” Patel said.

The first official also said, “Biden’s been there since January. He had ample time to revisit anything that he didn’t like… . We’ll own, whatever mistakes were made up until January 20th. But after that, they’ve had seven months and they haven’t done anything.”

Some of the former officials said what they see now in Afghanistan is reminiscent of the Obama administration, when Biden was vice president and Austin was commander of Central Command.

The first former official noted that Austin was in charge of the failed Pentagon program to train Syrian rebels to fight against the Islamic State in Iraq and Syria (ISIS).

“He had $500 million and…only four people who left standing at the first battle. And that was either through desertions or getting killed. That’s a terrible return on investment. Why would this person, why would we put him in charge of a $150 billion enterprise?” the former official said.

The second former senior defense official, who has worked on Afghanistan in previous administrations, said Biden’s decision stemmed as far back to 2010, when he wanted to leave Afghanistan altogether.

“This was an emotional decision — righting perceived wrongs from when he didn’t have the power that he has now in his brief moments of f-cking lucidity,” the former official said. “It’s his revenge against the generals in a way.”

“You’ve got a president who can’t even finish the sentences and you’ve got a defense secretary that won’t stand up to him — that’s dangerous,” the first former defense official said, adding that Biden had made up his mind, “Damn the torpedoes.”