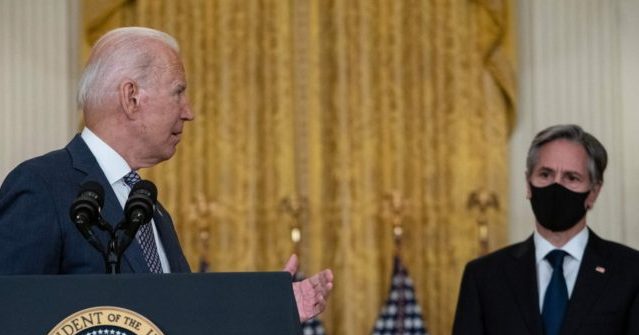 The president has stubbornly tried to maintain an August vacation throughout the crisis, but concerns about the bad political optics continue to topple his plans.

He expected to begin his vacation in Delaware on Thursday, but his departure was not scheduled until Friday afternoon. His plan to depart Friday was eventually canceled, but later rescheduled for Saturday.

Now Saturday’s departure is canceled, as the White House made another last-minute decision.

Biden was scheduled to leave the White House at noon, and reporters traveling with the president were already at the airport preparing for departure.

Travel pool had just arrived at @Andrews_JBA expecting an #Osprey flight to Delaware and overnight in Wilmington for @POTUS when the press office announced the trip is canceled today. No explanation has been provided. pic.twitter.com/mYhwbkzl22

News broke Saturday that the American embassy in Afghanistan was advising Americans not to travel to the airport in Kabul, warning of “potential security threats.”

Biden continues getting hammered by the facts on the ground in Kabul, even as he continues lying to the American people about what is going on.

“We have no indication that they haven’t been able to get — in Kabul — through the airport,” Biden said during his speech at the White House on Friday.

He said his administration was in “constant contact” with the Taliban, which he said gave him confidence Americans could get to the airport safely.

“We know of no circumstance where American citizens are — carrying an American passport — are trying to get through to the airport,” he repeated.