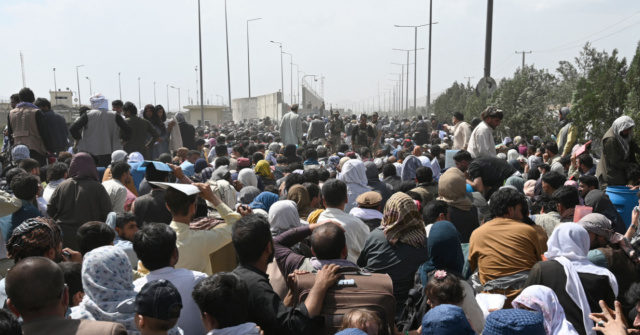 Historical comparisons can be tricky, but comparing what’s happening in Afghanistan at the hands of an enfeebled, uncaring Joe Biden to the fall of Saigon in 1975 is ludicrous in several glaring ways. The two don’t even compare. Let’s start with the most important one…

Here’s a fact history and academia hide from the American public: America won the Vietnam War. Nixon won. After a brutal American bombing campaign in December 1972, the Paris Peace Accords were signed in January 1973. The North Vietnamese agreed to end hostilities against the South, and this allowed U.S. forces, all of them, to withdraw.

That’s a victory. The whole point of our involvement in Vietnam was to stop the spread of communism, especially into South Vietnam. We accomplished that, and we left.

There was no such accomplishment in Afghanistan. Joe Biden knew it, and Biden still left thousands of American civilians stranded in Afghanistan when, by his own admission, he believed the Taliban would eventually take over Afghanistan in just a few months.

This is something he openly admitted during his disastrous interview with ABC News this week. He said straight out that he believed it was “a real possibility” Afghanistan would fall into the hands of the Taliban “by the end of the year” — a mere four months away.

STEPHANOPOULOS: But you know that Senator McConnell, others say this was not only predictable, it was predicted, including by him, based on intelligence briefings he was getting.

BIDEN: What — what did he say was predicted?

STEPHANOPOULOS: Senator McConnell said it was predictable that the Taliban was gonna take over.

BIDEN: Well, by the end of the year, I said that’s that was — that was a real possibility. But no one said it was gonna take over then when it was bein’ asked.

So Biden abandoned thousands of American civilians knowing 1) the war was lost, 2) believing thousands of his own citizens and tens of thousands of our Afghan allies had only four months to evacuate, and yet, 3) he did not evacuate them, but he did 4) remove the U.S. troops protecting them.

If that is not impeachable, what is?

When the U.S. withdrew from Vietnam, the South Vietnamese were able to defend their own country with the help of American ammunition and equipment. Also stopping a communist takeover was Nixon’s promise to support Saigon if the communists broke the peace treaty.

For more than two years, the South proved it could defend itself without American troops on the ground.

After Nixon was forced to resign and Gerald Ford became president, the Democrat-run Congress reneged on our support for South Vietnam, and the communists invaded. The fact is this: Democrats deliberately lost a won war.

That is not the case here. Biden abandoned Afghanistan believing the Taliban would take the country in just a few months and abandoned thousands of Americans anyway.

No one expected Saigon to fall as quickly as it did.

Despite Biden’s lies, we now know his administration was warned things could collapse as quickly as they did. The fall of Afghanistan was widely predicted. Yet, Biden did nothing about it —  other than to withdraw our troops, which left behind thousands of defenseless Americans, and then leave for vacation.

Because the fall of Saigon was a surprise, a messy evacuation was our only option. Unfortunately, this is not at all true with Afghanistan.

Biden knew for months we were leaving, even before he allegedly won the presidency. Biden also knew a Taliban takeover was inevitable. Nevertheless, he still — still! — removed our troops before evacuating the estimated 10,000 to 15,000 Americans who are now trapped behind terrorist lines.

This, to me, is unfathomable and unforgivable.

Why didn’t Biden evacuate our people and our Afghan allies while he had the chance, when he had the time?

Why did he abandon Americans to the terrorists he knew were coming?

Why did he pull our troops out before every American civilian was safely home?

In today’s dollars, after the communists in the North invaded the South, about $5 billion of U.S. war equipment was left behind for the communists to pick up and use. According to the New York Times at the time, this equipment consisted of “hundreds of artillery pieces, trucks, planes, mortars, tanks, armored personnel carriers, rifles and ammunition[.]”

The value of the war equipment left behind in Afghanistan is incalculable. Over 20 years, America spent more than $83 billion arming and training the Afghans. What we left behind for the terrorists to pick up boggles the mind:

Among the items seized by the Taliban are Black Hawk helicopters and A-29 Super Tucano attack aircraft.

Photos have also circulated of Taliban fighters clutching U.S.-made M4 carbines and M16 rifles instead of their iconic AK-47s. And the militants have been spotted with U.S. Humvees and mine-resistant ambush protected vehicles.

Between 2003 and 2016, the United States transferred 75,898 vehicles, 599,690 weapons, 162,643 pieces of communications equipment, 208 aircraft, and 16,191 pieces of intelligence, surveillance and reconnaissance equipment to Afghan forces, according to a 2017 Government Accountability Office report.

Another official said that while there are no definitive numbers yet, the current intelligence assessment was that the Taliban are believed to control more than 2,000 armored vehicles, including U.S. Humvees, and up to 40 aircraft potentially including UH-60 Black Hawks, scout attack helicopters, and ScanEagle military drones.

Between 2002 and 2017, the United States gave the Afghan military an estimated $28 billion in weaponry, including guns, rockets, night-vision goggles and even small drones for intelligence gathering.

Because there was no U.S. military presence in Saigon, there was no way to remove or destroy the U.S. war equipment as the South fell.

Biden knew we were leaving, knew Afghanistan would eventually fall into the hands of the jihadist terrorists, and as recently as last month, he was still shipping Blackhawk helicopters over there!

“Even as the U.S. military was withdrawing from Afghanistan,” reports the Hill, “the United States kept aircraft flowing to the Afghans, in July touting plans to send 35 Black Hawk helicopters and three A-29s.”

Why would Biden ship Blackhawks to Afghanistan when he believed the Taliban would own the country by the end of the year? This is pure madness.

Joe Biden had plenty of warning Kabul would fall over the weekend and still went on vacation, where — as Kabul fell trapping thousands of Americans — he hid out and remained incommunicado for four whole days. He then emerged just long enough to read a truculent 20-minute speech from a teleprompter, took zero questions, returned to his vacation, and went back into hiding. Then he gave a disastrous interview to ABC News, read from a teleprompter for another 20 minutes (about the vaccine), took no questions, and now he’s off to vacation in Delaware for the weekend.

There is something seriously wrong with Joe Biden.

While America’s abandonment of the South Vietnamese remains unforgivable, the truth is the North Vietnamese were not a threat to the American homeland.

Joe Biden just returned Afghanistan to the very same terrorists who aided and abetted the monsters who hit us on 9/11.

I was as eager as anyone to see us leave Afghanistan, but not like this; never like this.