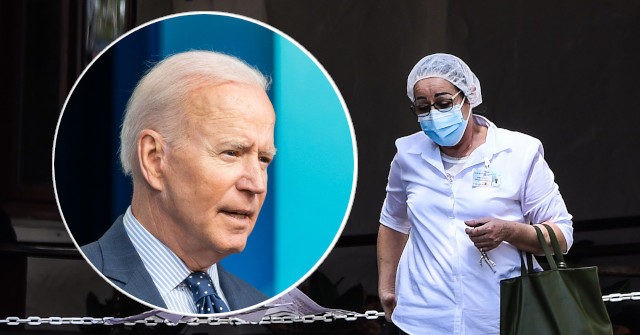 President Joe Biden’s administration will require staff of nursing homes to receive the coronavirus vaccine in order for such facilities to receive federal money for Medicare and Medicaid.

Biden will announce the move Wednesday afternoon in a White House address as the administration continues to look for ways to use mandates to encourage vaccine holdouts to get shots. A senior administration official confirmed the announcement on condition of anonymity to preview the news before Biden’s remarks. […] Hundreds of thousands of nursing home workers are not vaccinated, according to federal data, despite those facilities bearing the brunt of the early COVID-19 outbreak and their workers being among the first in the country to be eligible for shots.

The mandate will likely take effect as soon as next month, the AP said.

The report comes after Biden announced millions of federal workers must receive a vaccine or undergo regular testing by the government for the illness.

Earlier August, the Department of Defense announced that U.S. military members would must receive the vaccine as of September 15th.

“I will seek the president’s approval to make the vaccines mandatory no later than mid-September, or immediately upon” approval by the Food and Drug Administration (FDA) “whichever comes first,” Defense Secretary Lloyd Austin wrote in a memo to troops.

As Breitbart News reported over the weekend, some military members and their families are quietly pushing back against the potential mandate.

Mike Berry, a Marine reservist and lawyer for First Liberty Institute, told reporter Kristina Wong that his office is overwhelmed with calls and emails regarding the matter.

“Military and non-military combined, we’ve had over 400 requests for legal help just in the last week or so,” he said, adding that more have reached out with questions. “I’ve lost count,” Berry said.