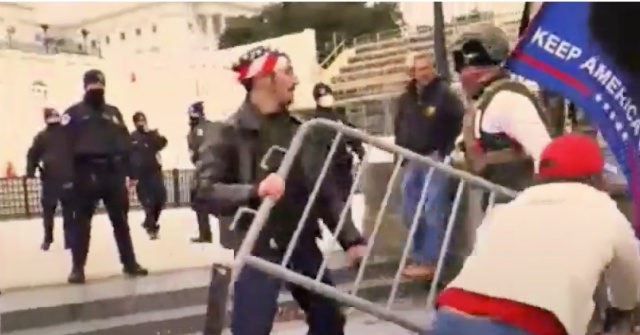 The FBI has found “scant” evidence that the January 6 riot at the U.S. Capitol was part of a plot to mount an insurrection against the U.S. government, or instigated by then-President Donald Trump, according to sources in a Reuters report.

The FBI has found scant evidence that the Jan. 6 attack on the U.S. Capitol was the result of an organized plot to overturn the presidential election result, according to four current and former law enforcement officials.

Though federal officials have arrested more than 570 alleged participants, the FBI at this point believes the violence was not centrally coordinated by far-right groups or prominent supporters of then-President Donald Trump, according to the sources, who have been either directly involved in or briefed regularly on the wide-ranging investigations.

“Ninety to ninety-five percent of these are one-off cases,” said a former senior law enforcement official with knowledge of the investigation. “Then you have five percent, maybe, of these militia groups that were more closely organized. But there was no grand scheme with Roger Stone and Alex Jones and all of these people to storm the Capitol and take hostages.”

[T]the FBI has so far found no evidence that he or people directly around [Trump] were involved in organizing the violence, according to the four current and former law enforcement officials.

Despite the lack of evidence, Speaker of the House Nancy Pelosi (D-CA) has convened a special committee to probe the riot, vetoing the members appointed by the Republican leadership and appointing several more compliant Republicans.
Earlier this month, Chief Judge Beryl A. Howell of the federal district court in Washington, DC, urged prosecutors to file more serious charges against rioters; they responded that they did not have evidence to sustain convictions on those claims.

Joel B. Pollak is Senior Editor-at-Large at Breitbart News and the host of Breitbart News Sunday on Sirius XM Patriot on Sunday evenings from 7 p.m. to 10 p.m. ET (4 p.m. to 7 p.m. PT). He is the author of the recent e-book, Neither Free nor Fair: The 2020 U.S. Presidential Election. His recent book, RED NOVEMBER, tells the story of the 2020 Democratic presidential primary from a conservative perspective. He is a winner of the 2018 Robert Novak Journalism Alumni Fellowship. Follow him on Twitter at @joelpollak.