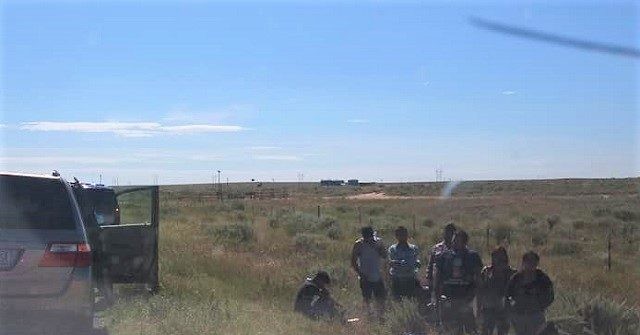 For a second time in as many days, Hutchinson County Sheriff Blaik Kemp and his deputies were forced to release migrants after federal officials refused to take them into custody. Sheriff’s office officials released the migrants, 24 in all, after Kemp exhausted all efforts to get assistance from federal agencies. Deputies arrested two suspects and charged them with Trafficking of Persons among other charges.

In the first incident on August 19, a Hutchinson County Sheriff’s deputy stopped a white SUV on a farm-to-market road near Borger, Texas. The deputy discovered 15 undocumented migrants crammed into the vehicle. The migrants, including one who was a minor, reported being hungry and had no water.

During the deputy’s investigation into the matter, he discovered the driver was allegedly trafficking the migrants to different locations within the United States. Deputies arrested the driver, identified as Juan Martinez, and charged him with 13 counts of Trafficking of Persons, a second-degree state felony. Deputies booked him into the Hutchinson County Jail.

The deputy summoned federal authorities to take custody of the undocumented migrants to no avail. Hutchinson County is serviced by the Big Bend Sector of the Border Patrol and the Dallas office of the Department of Homeland Security Investigations (HSI). The nearest office of Immigration and Customs Enforcement (ICE) is in Amarillo, Texas.

“Although we attempted avenues to obtain assistance from the federal government, they were unwilling to provide any help, and we were left to handle the situation with no resources or placement for the trafficked individuals,” the deputy told Breitbart Texas.

The 14 migrants being smuggled were taken to the Hutchinson County Annex building and provided food and water. Later, the migrants were delivered to a bus station and allowed to leave the area.

The following day, Sheriff Kemp and one of his deputies encountered a similar situation when they stopped a Honda Odyssey passenger van on State Highway 152 east of Borger. They discovered the driver of the vehicle was allegedly trafficking ten undocumented migrants packed tightly in the vehicle. The driver, who initially identified himself as Hector Perez-Morales, was charged with ten counts of Trafficking of Persons.

Further investigation revealed Perez-Morales was really Santos Victorino Perez-Lopez. Deputies found him to be in possession of $1,500.00 concealed on his person. The cash is believed to be proceeds from the human trafficking scheme.

Due to the lack of federal response, officials released the ten migrants allegedly being smuggled by Perez-Lopez along with the vehicle they were being transported in. According to HCSO, they have no authority or ability to enforce federal immigration laws. In the past, federal authorities would take custody of undocumented migrants encountered by the department. This, they say is not happening now.

Randy Clark is a 32-year veteran of the United States Border Patrol.  Prior to his retirement, he served as the Division Chief for Law Enforcement Operations, directing operations for nine Border Patrol Stations within the Del Rio, Texas, Sector. Follow him on Twitter @RandyClarkBBTX.